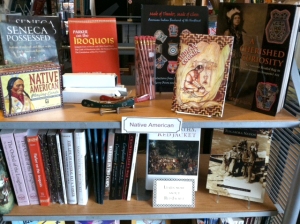 The shop at The Buffalo History Museum is not simply for souvenirs.  Although we do have plenty of those, we also stock items of local interest that are difficult to find elsewhere.  We carry a wide range of books about local history, many by local authors.  Among our book selection is an excellent collection on Native American history. Thumbing through the pages in this collection reveals a breadth of fascinating knowledge.  Most of us in Western New York have at least a rudimentary knowledge of local Seneca and Haudenosaunee (Iroquois) history.  But, our book collection on this subject dives into deeper levels of understanding on this important local culture.

One author who has spent his life digging into buried Iroquois history is Gerry Biron. It is important to note that Biron, like many Native authors today, prefers the term “Haudenosaunee” to refer to the Iroquois people.  Haudenosaunee is the name the Iroquois use to refer to themselves, and more people today are realizing it is respectful to use the Native term rather than one thrust upon them by outsiders.  Just as their name is being revived, Haudenosaunee art is also being given the recognition it deserves. Biron has spent years researching and collecting Native American beadwork made by the Haudenosaunee people from New York to Canada. He explains the historical importance of beadwork to the Native people.  Each design is filled with symbolism and meaning. The beadwork would grace clothing and accessories. Eventually these accessories, especially small ladies’ bags, would be sold as souvenirs at Niagara Falls.

Today many in the art world from collectors to galleries are emphasizing the notion that categories such as “folk art” and indigenous art have long been dismissed as kitsch, or “less than” the fine art standards as defined by Western sensibilities. Biron has made it his mission to redefine our perceptions and elevate Native beadwork to be recognized as art of important significance. His collection of beaded bags and antique photographs of beadwork have been displayed in galleries in the American Northeast. The Buffalo History Museum Shop carries two of his books; A Cherished Curiosity and Made of Thunder, Made of Glass.

Another author who is digging through hidden Native history is Sally Roesch Wagner.  In her book, Sisters in Spirit, Wagner explores how women’s rights advocates were inspired and influenced by Seneca women and cultural traditions.  We know that The Women’s Rights Movement of the mid-19th century was concurrent with the Abolitionist movement. These two groups often worked together, as both recognized that they were two disadvantaged groups in society. These movements were heavily based in Western and Central New York.  In fact, both the Susan B. Anthony House and the Frederick Douglas Resource Center are located in our close neighbor city, Rochester.  The famous Seneca Falls Convention for Women’s Rights was held in Seneca Falls, NY, in 1848. But, many of us don’t realize the ties between women’s rights advocates and the local Native people of Western, NY.

Sally Roesch Wagner says that while Susan B. Anthony is the main person that history often focuses on when discussing the Women’s Rights Movement, she chooses instead to discuss Elizabeth Cady Stanton and Matilda Joslyn Gage; two women with strong views that are controversial even today.  But, what is striking about these women is their efforts to immerse themselves in understanding the culture of their Seneca neighbors. While many people today don’t understand the complex dynamic of the hierarchy of the Iroquois Federation, Wagner explains that Harriet Maxwell Converse, a close friend of Matilda Joslyn Gage, understood it very well. Converse explained that the Iroquois Federation was made up of six distinct nations, and each nation was unique. She says “The Seneca Nation… is as distinct among Indians as France, Germany, and England are distinct among the nations of Europe” (p23). Within each nation are several tribes.  Therefore the Seneca are not a tribe, but the nation that houses many tribes. This distinction is important because referring to the nations as tribes diminishes their status and affects how they are perceived by those responsible for negotiating and honoring treaties.

Because they exposed themselves to Native life and culture, these women’s rights advocates observed a social dynamic completely unlike the Western model. While men and women of the Seneca certainly did have gender roles, their roles did not subjugate women. Since the Seneca traced ancestry through the matrilineal line, women retained custodial rights of children, whereas European American women lost custody of their children in the event of a divorce. Other issues which are uncomfortable to discuss, such as a women’s right over her own body and domestic abuse, are also explored by Wagner. In an age when a woman who fled from an abusive marriage could be forcibly returned to her husband just as runaway slaves were returned to their masters, women’s rights advocates from Upstate New York found inspiration in the rights afforded to their neighboring Seneca women.

These books are only a fraction of the Native American selection we stock here in the Museum shop. While these examples highlight largely unknown history, we also carry books that are more general overviews, as well as children’s history books about Native culture, as well as gifts and trinkets such as playing cards, miniature canoes, and other items. These items compliment a visit to the museum to see our wonderful Native American exhibit. So, please plan a day to learn a little about local Seneca culture at the Buffalo History Museum and Shop!