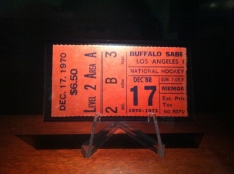 One of the many tickets on display from the 1970-75 Sabres seasons.

I was probably 6 or 7 years old when I first started watching hockey. My aunt would come over to babysit my brother and me. We’d make popcorn in the air-popper and plop down on the couch in front of our now prehistoric Zenith television. It wasn’t long before my father took me to my first game. It was against Winnipeg. We sat up in the oranges. I can remember the people in front of me chanting, “Fly Home, Jets!”

Growing up in Kenmore, my friends and I played street hockey until it was too dark to see the bright orange ball. When Sega Genesis came along, NHL ’93 was one of my first games. We played every day after school. (To this day, NHL’14 is the only reason I own a Sony Playstation) I was like a lot of kids, hockey was just always in our lives. 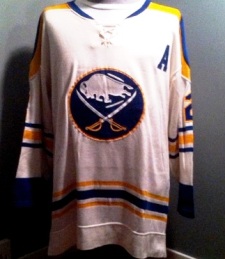 I’m on a ladder, installing into a case the last home jersey that Tim Horton wore before his tragic car accident. Sometimes I feel bad that other people can’t have my job.

Since our Buffalo Sabres exhibit opened last Friday, I have met countless people who have come in to relive some of the team’s early days. They share with me their stories. They tell me about how their first game, their favorite moments, and their favorite players. In that moment, you realize that we are all so similar. In that moment you realize that, someday, you might be in their shoes.

We all seek to share stories with one another. What better place than here?

FORGING A CONNECTION: YOUR BUFFALO SABRES 1970-1975 runs through May 25, 2014
at The Buffalo History Museum, located at 1 Museum Court at Elmwood Avenue