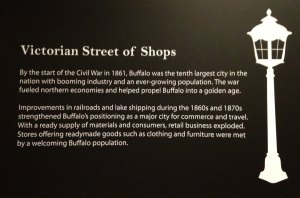 Above the staircase and leading to the museum’s lower level are engraved words, “1870s Street of Shops.” This signage and the exhibit it teases were intended to endure time. For over a half century, it has done just that.

The exhibit lies within earshot of my office, from which I have listened as thousands of visitors have passed through the artificial streetscape. Many reminisce about their childhoods, each storefront sparking a different story. Others recall seeing the display with their parents when they were young. It became evident that the exhibit had, over time, become as much a part of people’s memories as the items held within it. 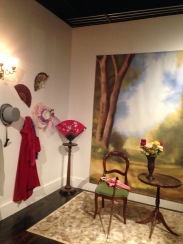 In recognition of this, we worked to update the Street of Shops while maintaining its history and charm. The exhibit now boasts a new paint job, with colors inspired by late 19th century paint swatches preserved in our library. A newly installed ceiling painted as the sky adds to the display’s immersive ambience. The most notable change, however, is the space formerly occupied by our Buffalo Savings Bank display which has been transformed into a family-friendly interactive photo studio. 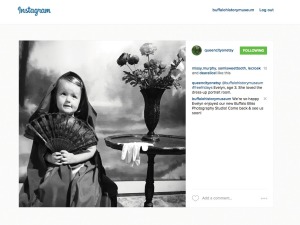 The newly added space, Bliss Bros. Studio, was inspired by a longstanding and well-respected photography business which first opened on Main Street in 1861. For over 50 years, the Bliss family produced some of the city’s finest portraits and landscapes. Now, the story of their business will be shared with our visitors. 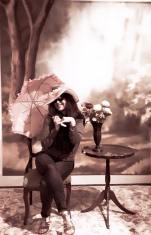 Inside the studio, guests are encouraged to dress up in vintage clothing and pose in front of our custom made backdrop to create their own vintage portrait. Images may be shared via social media by using the hashtag #buffalobliss. When at the Museum, visit our new studio, take your picture (or a “selfie” as it were) and join in on the fun while being a part of continuing story of photography.

(This article was featured in our Summer 2015 issue of “The Album“. TBHM’s quarterly newsletter)