In 1987, Julia Boyer Reinstein, historian and architectural preservationist, donated over 80 quilts and bed coverings to The Buffalo History Museum. Early on in her life, Julia became fascinated with quilts and believed in the importance of documenting their histories. She received a Bachelor’s degree in History from Elmira College for Women in 1928, writing her senior thesis on early American quilts. Beginning her collection with family quilts, she focused her collecting goals on quilts made west of the Genesee River. Remarkably, only twelve of the quilts in her collection were purchased, the rest were given to her as gifts or through inheritance. 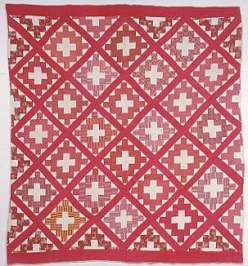 Pictured is a red and white Chimney Sweep quilt from Julia Boyer Reinstein’s quilt collection, also known as an Album or Autograph quilt. It was pieced together by Eliza Graves (later Pickett) between 1852 and 1853, and was assembled and completed in 1854, in Perry, NY. Eliza Graves, pictured above, was Julia Boyer Reinstein’s great grandmother. The Chimney Sweep pattern was very popular for Album quilts in the mid-19th century because a name or inscription could be written on the central cross of each block. According to oral histories from the family, the blocks of this quilt were originally autographed, in pencil, by the young men of Castile, NY.  Before Eliza could embroider the names, she became engaged to Daniel Pickett.  Once she assembled the quilt, she chose to wash out all of the names, eliminating the memory of her previous suitors. The quilt is backed with her own handspun and hand-loomed cotton.