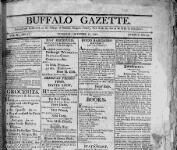 The Buffalo Gazette was founded by the Salisbury brothers, Hezekiah A. Salisbury (1789-1856) and Smith H. Salisbury (ca. 1783-1832). Because of the difficulty of securing reliable supplies of paper, publication was irregular. The first paper mill west of the Genesee River did not open until 1817 in Batavia.

The first page of the issue of the Gazette devoted several column inches to listing books and pamphlets available for sale at the Buffalo Book Store and featured an excerpt from the Manual of the State of New York. Back then, “news” was what happened in the outside world, information that was in high demand in isolated frontier villages. What happened here was already known to Buffalo’s small population (1508 in the 1810 census). Local coverage was sometimes sparse in these early newspapers.

War of 1812 researchers will be disappointed by the Gazette’s lack of coverage of the Burning of Buffalo. Dec. 14, 1812, was the last time the Gazette was published before the press was moved for safety to Harris Hill in Clarence. The Salisbury brothers had assessed the risk correctly, for the British burned Buffalo to the ground on December 30, 1813. No reporters were at the scene; residents supplied eyewitness accounts, sometimes long after the event. The next issue of the Gazette appeared on January 18, 1814. It did not return to Buffalo until April 1814.

The Research Library has the Buffalo Gazette on microfilm, plus it owns a set of very fragile bound volumes of original issues starting in December 1812. The Gazette underwent a series of name changes (Niagara Patriot, Buffalo Patriot, Buffalo Patriot & Commercial Advertiser), ending its long journalism tenure in December 1924 as the Buffalo Commercial Advertiser. We have all surviving issues of these newspapers on microfilm.

In 1812, the Salisbury press also published Buffalo’s first book, the French Convert, an anti-Catholic novel that had been popular in Europe for almost a century. The Research Library owns the sole surviving copy in Buffalo. The Salisbury press next published speeches by Red Jacket and Erastus Granger on the role of Indians in the War of 1812.

To see the Buffalo Gazette and the French Convert, visit the Research Library during our public service hours, Wednesdays through Saturdays, 1-5 pm, with special extended Research Library hours the 2nd and 4th Wed. of each month 6- 8 p.m. No appointments are necessary.