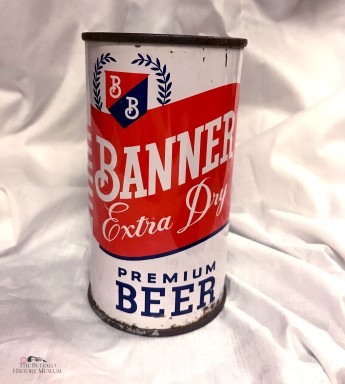 On this day (OTD) in 1935, the first can of beer was sold in Richmond, Virginia by the Gottfried Krueger Brewing Company; 91% of the consumers approved of the canned beer and as they say, the rest is history.  Historically, Buffalo has always been an alcoholic-beverage-loving city – just take a look at the Google maps Buffalo Drinking Map from 1828 to present day that Amy Miller, from our Library, created.   We have numerous beer bottles in our Collection that were used by many of the local brewers throughout Buffalo’s history, but in celebration of the ‘beer can’ theme today, we scanned through our database, Past Perfect, to see what we could find.

Donated in 2011 by Mr. Phillip DiFrancisco, this can of Banner Extra Dry Premium Beer was brewed, canned and packed by George F. Stein Brewery Inc..  The owner of the brewery, Mr. George F. Stein, was born in Germany in 1865, learning how to brew in Bavarian breweries until 1885, when we moved to Buffalo, N.Y. as an employee at the Lang brewery.  He would go on to work for the International brewery and the Clinton Star brewery before starting the Germania Brewing Company (located at Broadway and Bailey avenue) from 1892-1909 with his father-in-law, Conrad Hammer.

From 1909 until 1918, Stein operated Stein’s Ale Brewery in Medina but returned to Buffalo as the brewmaster of the Binz brewery at 797-807 Broadway Ave.  In 1920, Prohibition closed all breweries but Stein purchased the Broadway Ave. building in 1928 and began manufacturing liquid malt, concentrated malt and syrups to sell to bakeries as the Broadway Blending Company.  When beer was legalized in 1933, Stein began to brew beer again at the George F. Stein Brewery Inc. until his death in 1938.