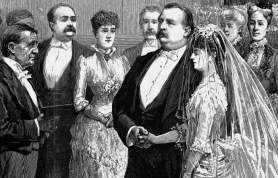 While critics of the President considered the May-September marriage scandalous, the public was enamored by the First Lady’s youth and beauty, likening the White House romance to Royal nuptials. The President’s handlers also capitalized, using France’s age as a positive image for the 40-year-old Cleveland. Today, 129 years after America’s first “royal” wedding, the Buffalo History Museum shares in its memory by displaying a small slice of wedding cake. Guests attending the ceremony were given cake boxes, holding small groom’s cakes. These cakes were dark and soaked in alcohol which may account for its excellent state of preservation. 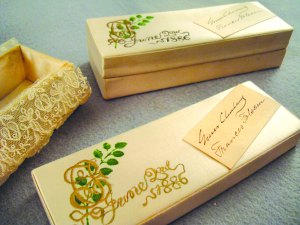 In 1886 it was not uncommon to receive a piece of wedding cake as a parting favor from the wedded couple. Tradition dictated that if one placed the cake under their pillow they would dream of their future spouse. – Rebecca Justinger, Registar   *This article was featured in the Spring 2013 issue of “The Album”